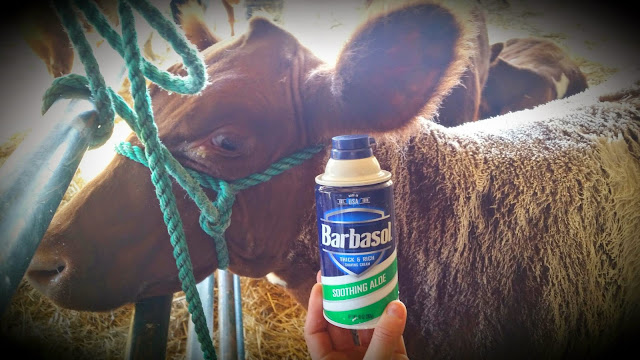 In 1919 a gentleman by the name of Frank Shields a former professor at MIT developed the first shaving cream that did not have to be worked into a lather. He wanted a product for men that could be used in a tough beard and on sensitive skin like he had with little effort.. In the 1920's and 30's even through the depression the company Barbasol continued to grow with nearly 400 employees. They got famous celebrities, athletes and musicians to endorse their product. Barbasol even ran ads in the 50's stating that men who used their product were more likely to get the ladies! You could have all this for merely 75 cents. There were marketing geniuses even back then.

When Frank developed this product I think it would be safe to assume he never had a thought in his mind about this product being used on cattle.
Last week I helped some friends get their sale cattle ready for their farm open house. They have shorthorn cattle and have a beautiful farm, Turner Shorthorns check them out to learn more about shorthorn cattle. I am now officially trained in foaming cattle using non other than Barbasol. Getting calves ready is a pretty time consuming process. This is an old technique that can be used to add some body to the cattle's hair to make it look fluffy  (in simple terms) and it costs much less than some other products.
﻿﻿﻿﻿﻿﻿I am a sheep girl not a cattle girl but  have learned a lot about cattle in the last few years. It appears my children have a hankering for cows. I never thought I would become a seasoned pro at using shaving cream on cattle.  Here is the beautification using shaving cream works.
﻿