Support agriculture and celebrate the real reason for CHRISTmas 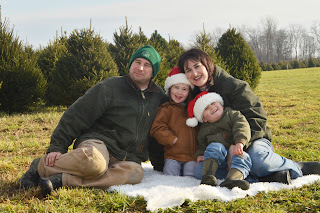 The Reese family is known for many things: orneriness, entertainment and "dazzling good looks"….. (direct quote from Matt Reese)


But perhaps the Christmas tree is what we are most known for, at least in northwest Ohio. My in-laws Dave and Jan Reese started Kaleidoscope Farms when their four young boys were small. They wanted to create a business that would teach their boys a good work ethic, religious values and make a little money to help put for college.

So now those four little boys are grown and there is a new generation of helpers in town. Our two Campbell and Parker love to help on the farm. This year the kids are getting old enough to learn what Christmas is all about. We talk about why we celebrate and how fortunate we are to be able to have a home, the freedoms to worship the one true God and even put some nice gifts under the tree. While we do sell Christmas Trees, we hope that you will remember the true meaning of Christmas while picking out that perfect tree this year and remember why we celebrate.

The appearance of the bright star or angel reminds us that God is still actively involved in revealing Himself to mankind.

The night Jesus was born in Bethlehem, the archangel Gabriel appeared to the shepherds announcing the wonderful birth of the Savior into the world. And then there was the star that moved across the sky while the three wise men from the East followed it. They knew, that at a certain time, a child would be born that would rule as King of a kingdom that would never end. They went and worshiped Him, presenting him with precious gifts.

The colorful decorations and beautiful lights, pictures of loved ones, lovely ornaments, more angels and stars, sparkling trinkets along with some glittering tinsel adorning the tree remind us of the magnificent gift that our Heavenly Father presented to all humankind that night.

The gifts that are so lovingly wrapped and placed under the tree were originally intended as reminders of God’s gift of love and our response to his gift. People were giving to show their love and belief in Christ, for everything He did and the love that was shown toward them when He died on the cross.

This gift from God is with us throughout the year but we memorialize it by putting up a tree during the Christmas season. The decorated tree is a visual reminder that on that night long ago God sent us the greatest gift that has ever been given, His Son Jesus Christ. He is still with us today.

“For God so loved the world that He gave His one and only Son, that whoever believes in him shall not perish but have eternal life.”
Posted by Unknown

Thank you for continuing to remind all of us! May your CHRISTmas be blessed and your blog touch the hearts of many! Thank you for sharing!
Merry CHRISTmas Reese family!
The Cook Family

Love your blog. Thank you for sharing your family with us. Have a Merry Christmas full of Christ's Love.